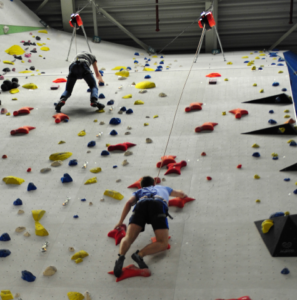 What could be better than practicing your climbing sport safely, nothing! First and foremost is fun, that exciting new route, even higher or faster than your last climb. Amazing, and the adrenaline rush you feel! But automatically secured against the risks of one of the most underestimated phenomena on our planet; gravity. After all, you cannot feel, hear, smell or see it, but it is always there. HONOR AdventureTech’s Auto Belays – the only ones with kernmantel lines – protect you from this danger while practicing your hobby or sport and make climbing safe and accessible for everyone.

HONOR AdventureTech is now a separate private company and split off from HONOR Safety & Consultancy. That is why we would like to refer you to the (English) website of our sister company HONOR AventureTech B.V. as a developer, manufacturer and your supplier of premium Auto Belay (climbing wall decenders) for sport and recreational climbers under the brand name STAR-belay. HONOR AdventureTech also makes ZIP-brake devices that comfortably slow people down at the end of ziplines. The many accessories complete their range.

What are Auto Belay Devices?

Auto belays are automatic belay devices that takes up the slack as a climber ascends the climbing wall. If the climber reaches the top, or falls, the Auto Belay immediately arrestes the fall and lets the climber descend to the ground safely and automatically.Auto belays allow people to climb when a partner is not available, to climb on their own schedule or make it possible to handle larger groups of climbers. New climbers can learn climbing before they also have learn the technical skills of belaying. The HONOR “climbing wall devices”, meeting the standards of descending and retractable fall arrest devices, so offer this unique height safety during climbing.

All devices are equipped with kernmantel rope!
Before the climber starts climbing, he connnect himself on the line of the device. The line automatically rolls into the device during climbing.After reaching the top and at any time that she or he wants to go down or in case of a fall, the climber descends automatically, with approx. 1 m / s safely! The intensity of use, ie the total number of descent meters, is determined by means of recorded a counter on the device.

The HONOR STAR belays types CWD9 and CWD16 (Climbing Wall Descender) have been specifically developed as a top fuse when climbing on (Clip ‘n Climb and Fun Climb) climbing walls, height course, adventure parcs, etc. and as a training device for sport climbers.Wherever climbers need to be able to rely on real fall protection. Besides sports and recreational climbers, auto belays are mostly used for school outings, birthday parties, team building sessions or other climbing entertainment for groups! The climbing wall devices are equipped with an automatic descent brake and allow the climber to descend in a controlled manner and at a speed of approx. 1 m/s, for example after reaching the top of the climbing wall or in the event of a fall after a mistake.

Climbing is Olympic starting in 2020! As part of the all-around event, the best sport climbers at the Olympic Games also compete with each other in the Speed Climbing section.The CWD20 SPEED is currently the fastest speed belay in the world with a roll-in speed of 5 m / s, more than fast enough for the world record holder!There are many good reasons for choosing HONOR Auto Belays!

There are many good reasons to choose HONOR Auto Belays!